We had two unplanned hostel stays in the last stretch — three nights, since the first, at Neel's Gap turned into a rainy-day zero.

Apparently there is lots of real estate to be purchased in Hiawassee: lots of people who had a cabin, but can't afford it any more. 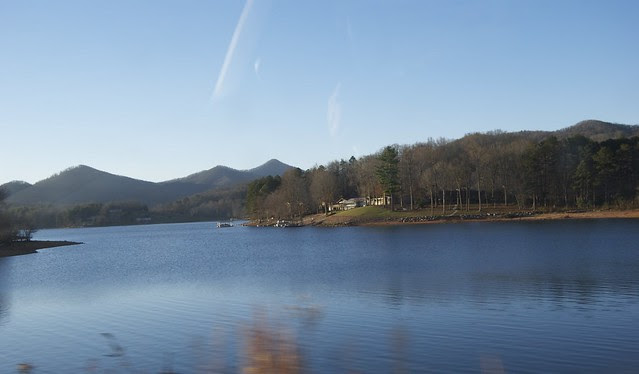 Another new form of ice, for me: ice curls in the ground. 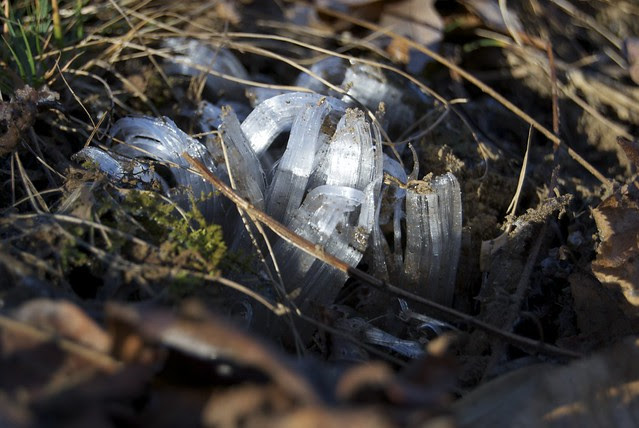 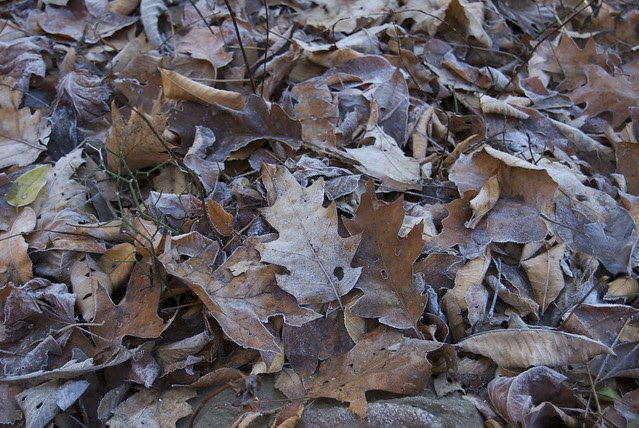 It was cold, but not without sun — frozen on one side of a ridge, and comfortable to sit and snack and take one's gloves off on the other. 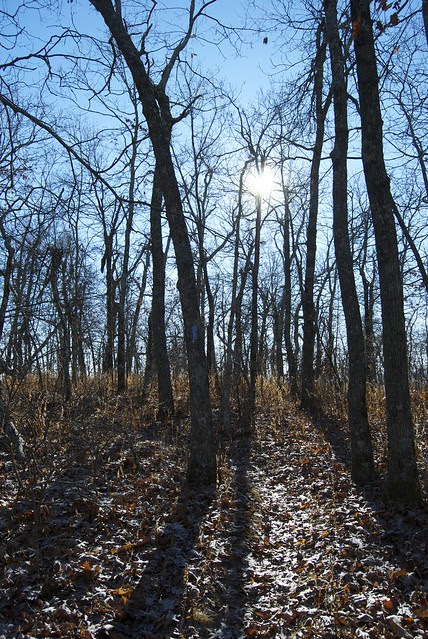 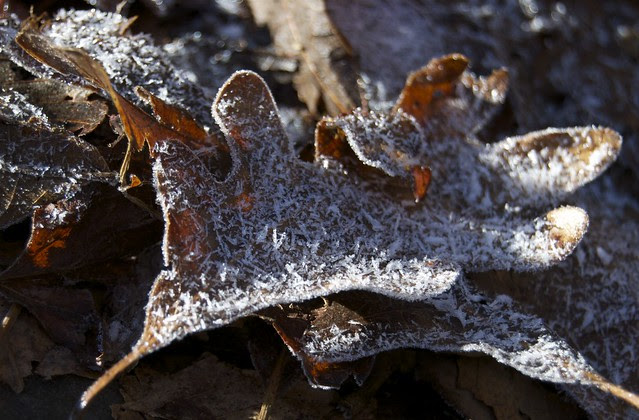 Of the various things they look like, rice noodles is my favorite association. That, or alien sprouts. (That might be hiker-stomach talking.) 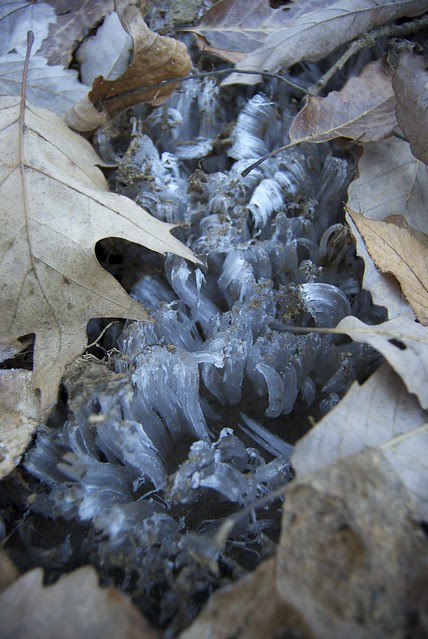 Jo thought it was very cold. 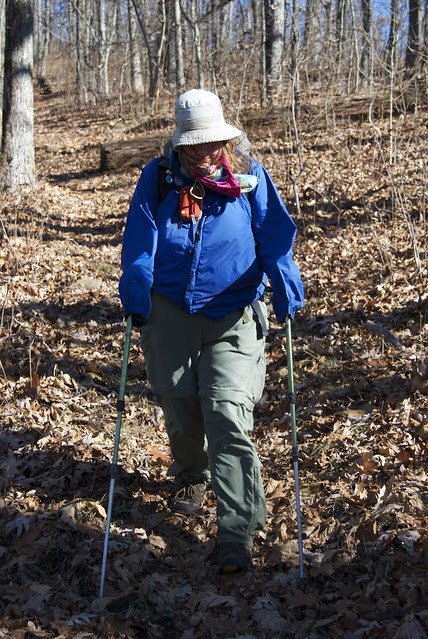 The view from Tray Mountain: 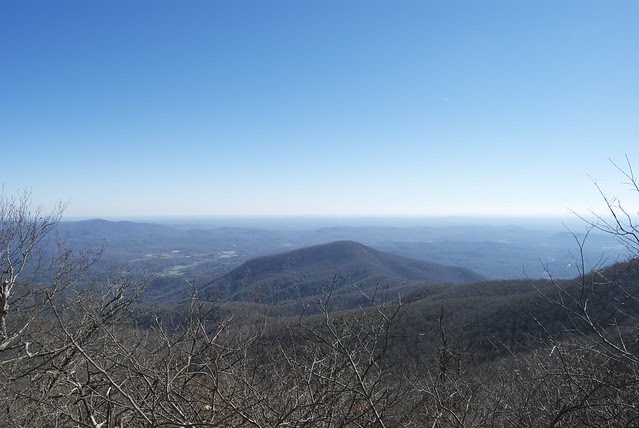 The Tray Mountain shelter already had one occupant when we got there — he had set up his tent for extra warmth, and was gathering fire wood. We considered being done and staying there, but decided to hike on down. 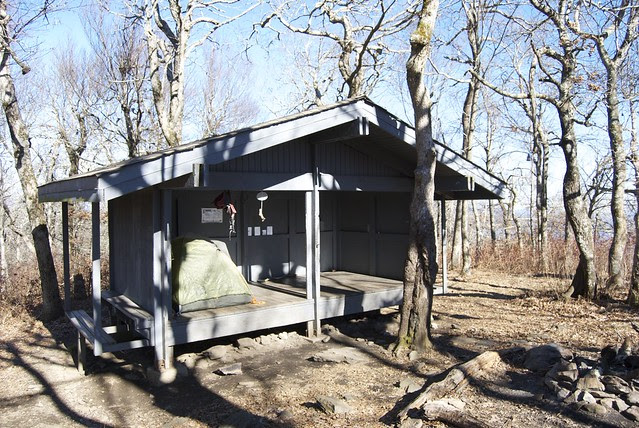 On the way down, we passed a bunch of day hikers (ten-ish), all headed for Tray Mountain shelter, which (along with the prospect of a cold and windy night there) made us glad not to have stayed. 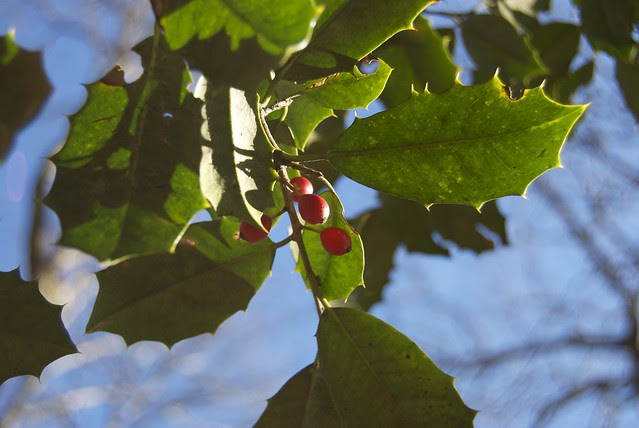 We camped at the Cheese Factory site — apparently there was one, once, though no ruins or other signs of build-up any longer. 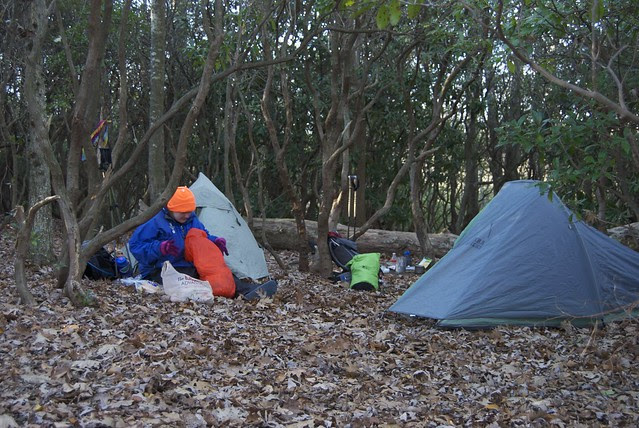 The first night out from resupply, we both fill our 20L food bags. (It takes a bit of heaving and pulling to hang them.) 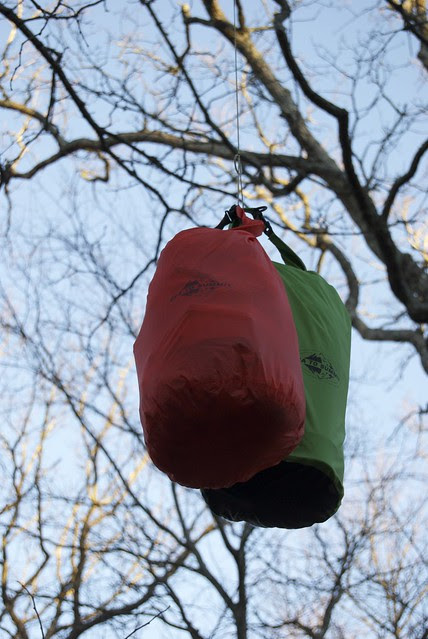 In the morning, we found that another southbounder, Low Step, had camped near us later in the night; he said hello before heading out, but then stayed ahead of us. 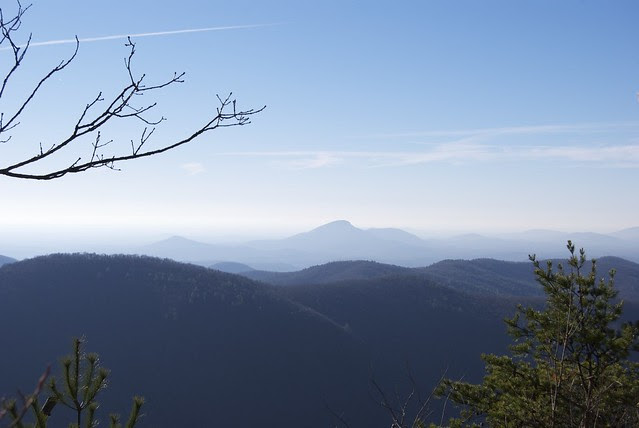 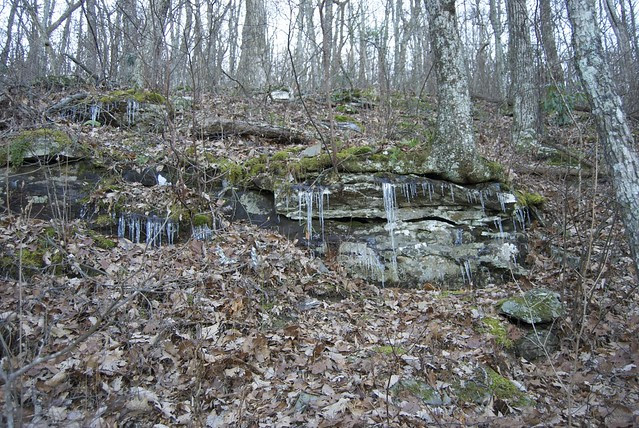 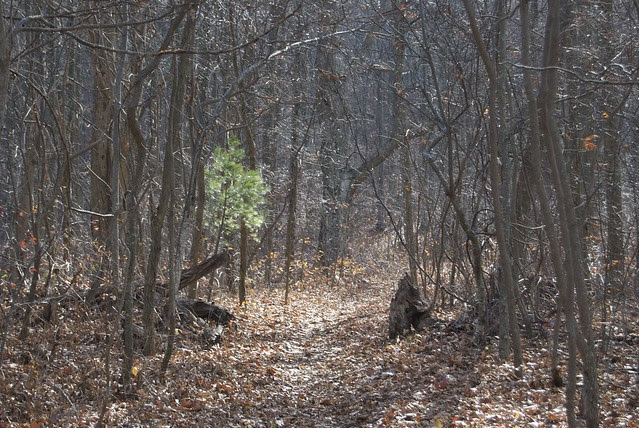 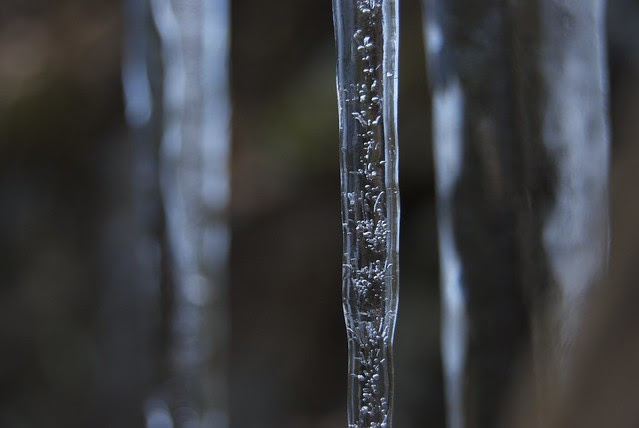 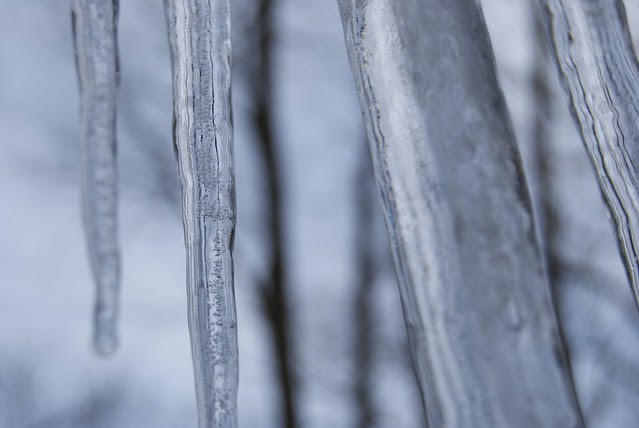 A significant portion of the day's hiking was on a troad — that is (although The Internet doesn't recognize the word) the trail's tread following an old logging road. (Ed, who we shared the shelter with that night, gave us the vocab. word.) 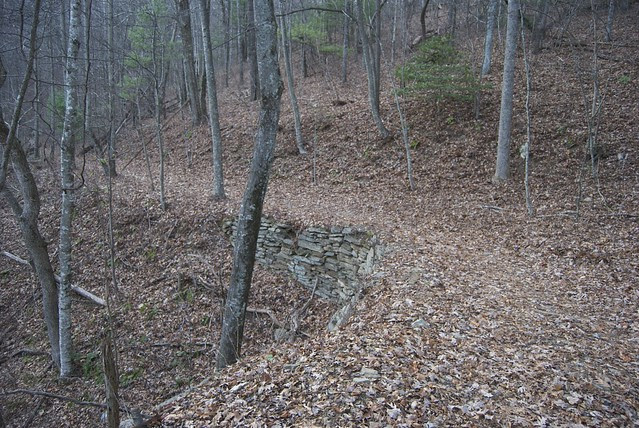 We stayed at Low Gap Shelter. 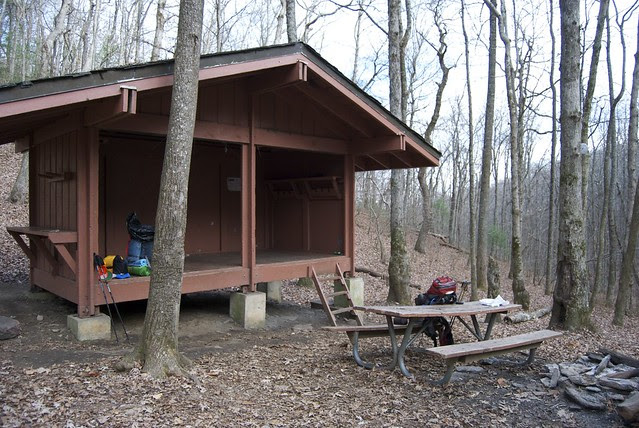 Along the trail occasionally, in much of Georgia, there is evidence of wild hogs. We didn't see any, but saw some register entries mentioning them. 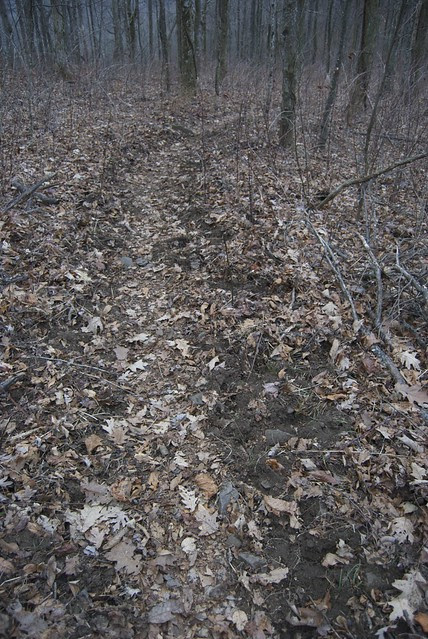 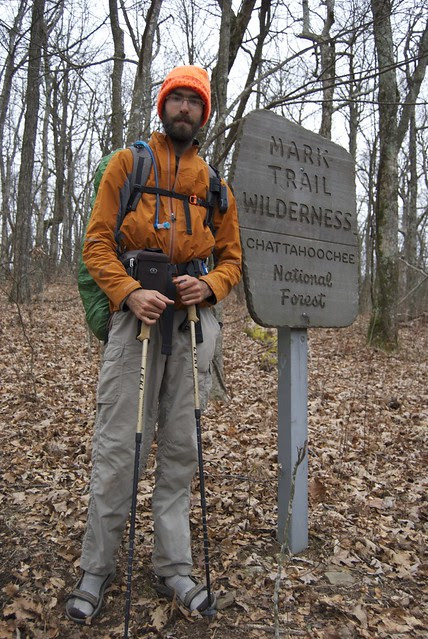 It drizzled and rained most of the day. 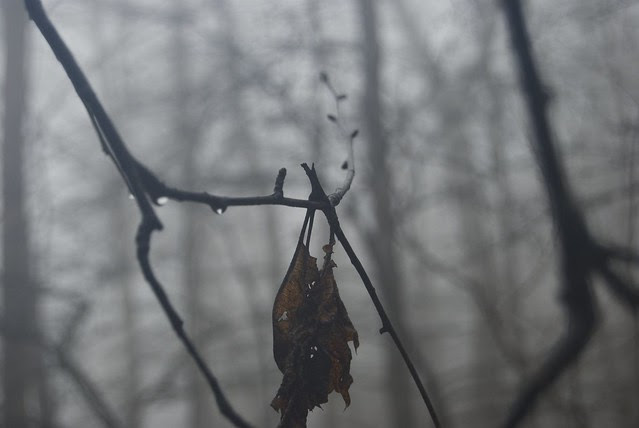 Neel's Gap — a welcome sight as the rain picked up — is the only place the trail goes through a building. (There is an outfitter store to the left, uphill; and to the right, the downstairs is the hostel, and the upstairs is — we think — employee housing.) 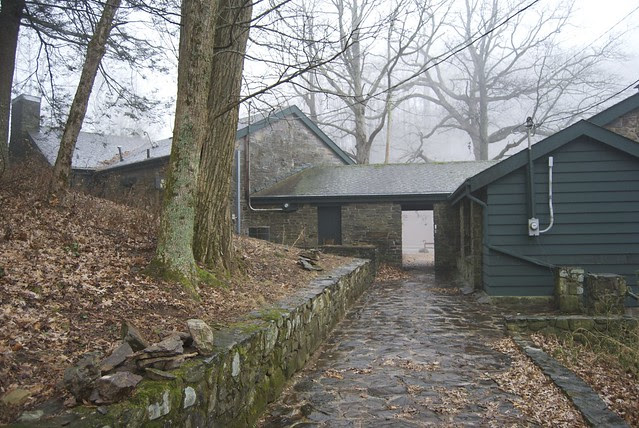 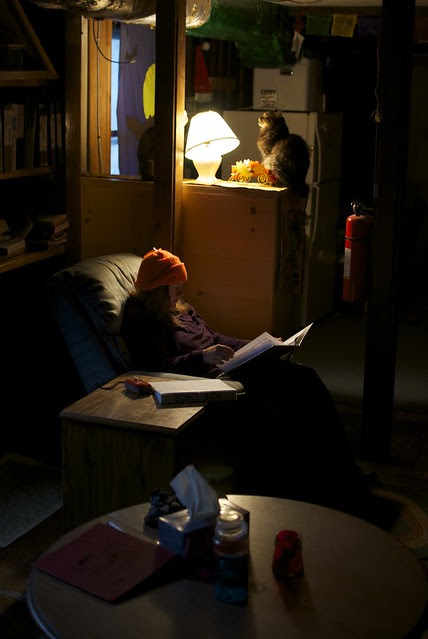 Jo's pack — when new, as was the one in the store — used to be more vibrantly colored. 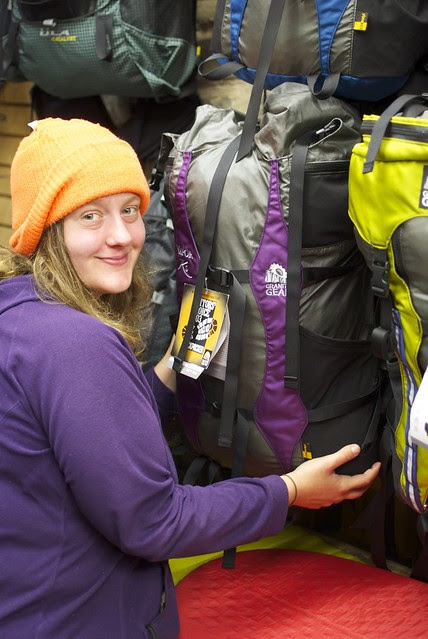 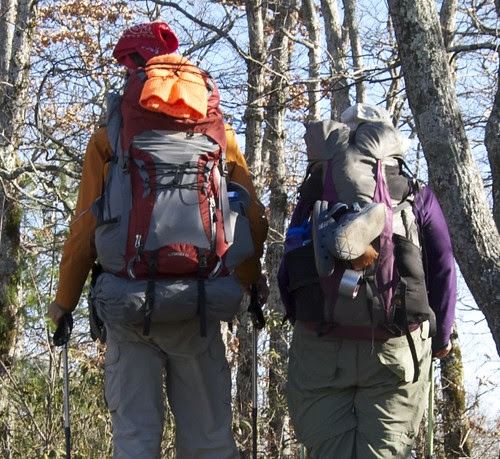 In the store, there are 500-mile shoes hanging along the ceiling — including a few sandals. 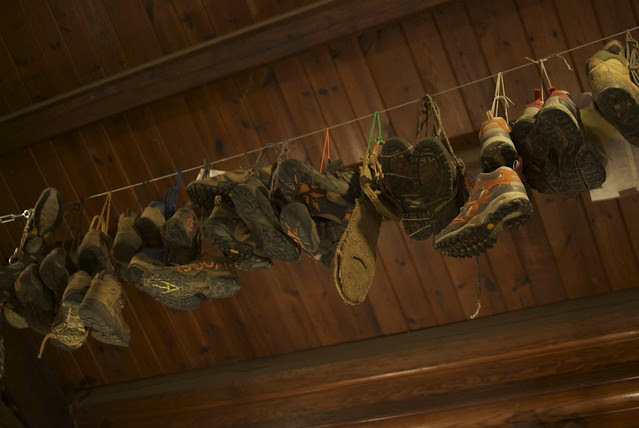 As the first day finished and then the zero day passed, the hostel filled up a bit: another southbounder (Sweet Talk), a pair of northbounders (Mama Bear and Papa Bear, embarking on a fresh attempt), and a section hiker (I guess we see where my name-storage space is allocated).

I have mixed feelings about Pirate's Hostel. It had an undercurrent of bitterness and ambivalence: the fridge in the hostel area had locks on it; the computer had no internet because in the past hikers couldn't learn to share; the usual complement of snoring; DVDs available only to borrow one at a time due to people stealing them. But it also had what we needed — showers, a place to stay during a day of torrential rain, frozen food from the store — and good things like cats, and sloppy joes for dinner compliments of Pirate, and breakfast (but don't miss it). It was the right decision, but not entirely warm and fuzzy. 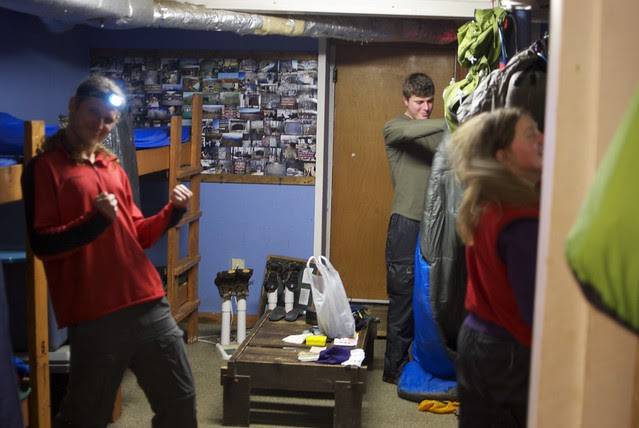