Our second-to-last stretch was a short one, two nights out from Franklin, NC (around a rather circituitous and, in retrospect, avoidable loop) to Hiawassee, GA — 2010 November 24-26th.

The morning in Franklin was overcast, but as we drove up to the gap (shuttled by the motel), we broke into sunlight; until late morning, our views were of peaks through a sea of clouds. 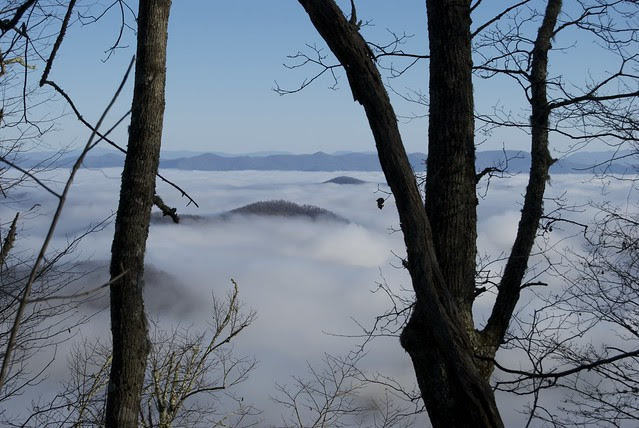 Another mysterious message — but at least this time my doppelganger isn't dead, just tall. 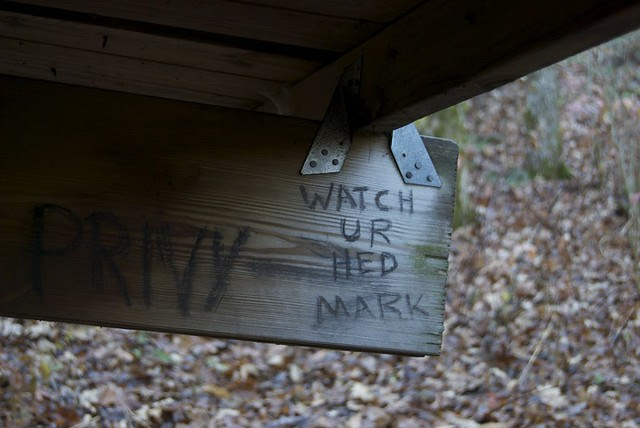 Another tower: a good view from the stairs, even though the top deck is locked (presumably for the protection of weather sensing equipment). 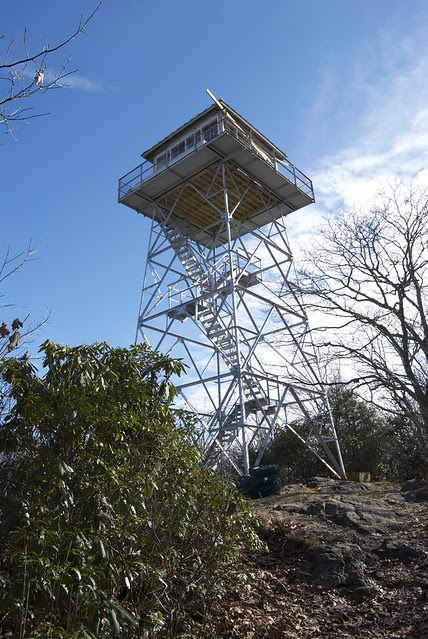 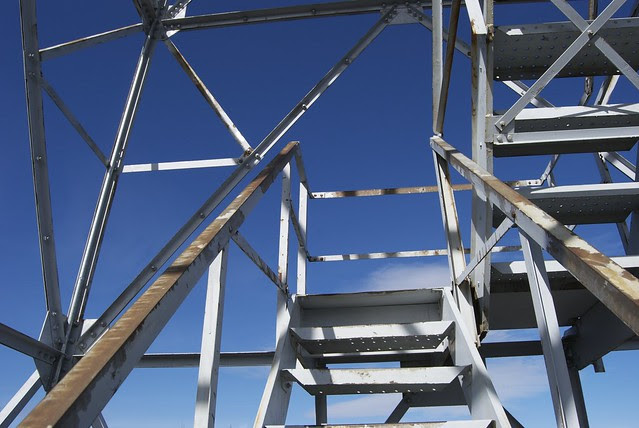 To the right, Georgia is almost certainly visible, although by the trail we were another full day of hiking (north, then south again) to get there. To the left, perhaps still the Smokies at the horizon. 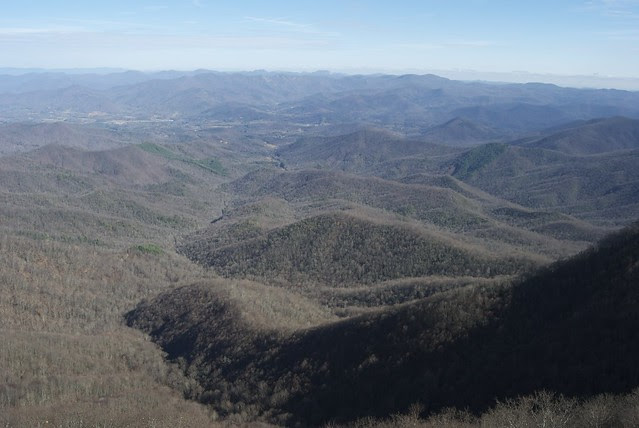 Sausages for dinner (and I packed out Pillsbury dough in a tube for fresh buns). Another everyday occurance — at least when we had sausages: Jo had finished her meal by the time I had finished my first (painstakingly slow-roasted) sausage. 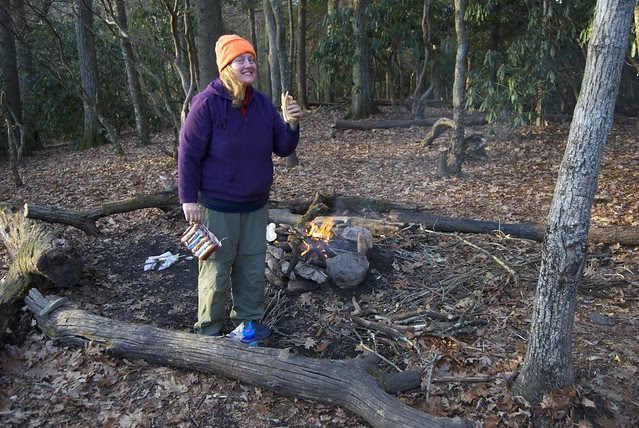 What is it? What's it doing? (Lichen? Blooming?) 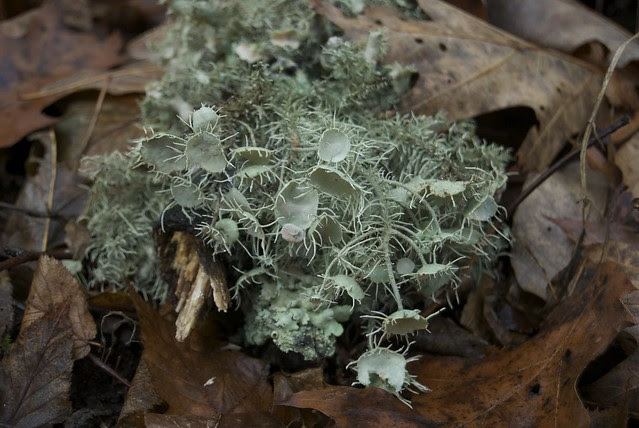 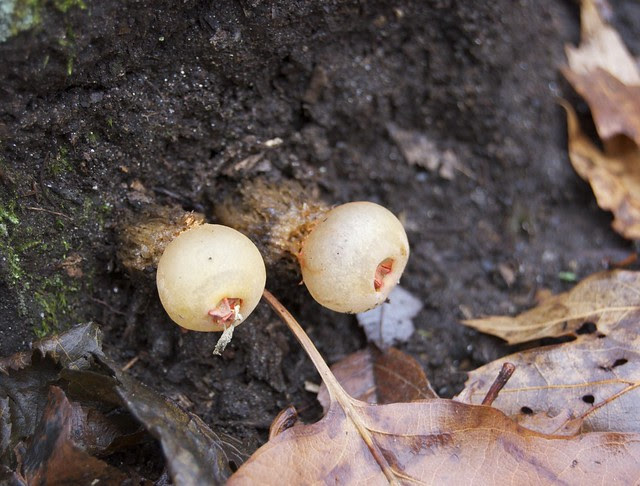 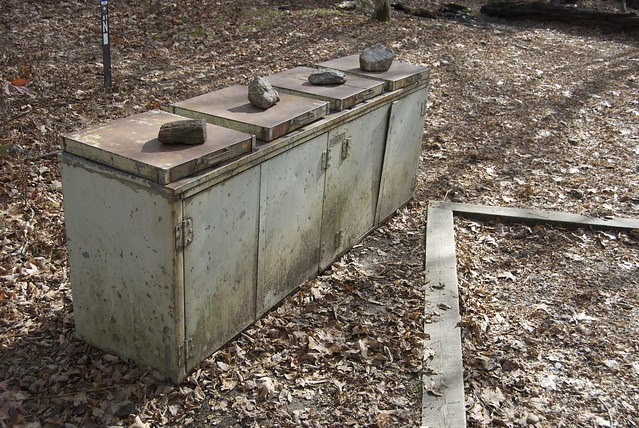 This tree is in the guide book as 'often photographed'. 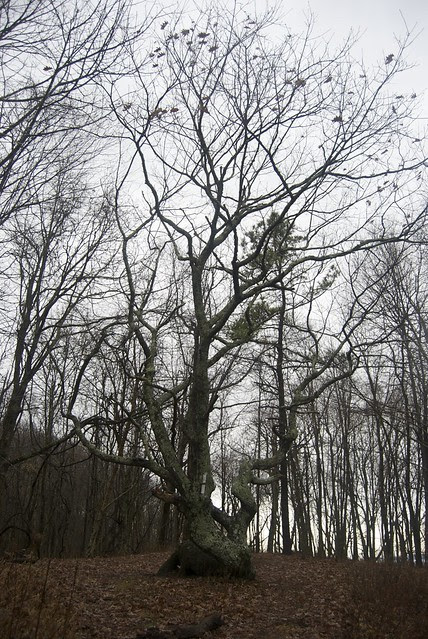 The Georgia border! Or, rather, the sign for it; the actual border is a few hundred feet further south. It was another in-a-cloud day; my lens was strongly fogged up and refused to defrost, so I ended up digging my lens-cleaning cloth out of my pack (hooray for the front zipper). (Jo was hiking ahead of me, and left me the Crunch bar on the sign. Extra snacks!) 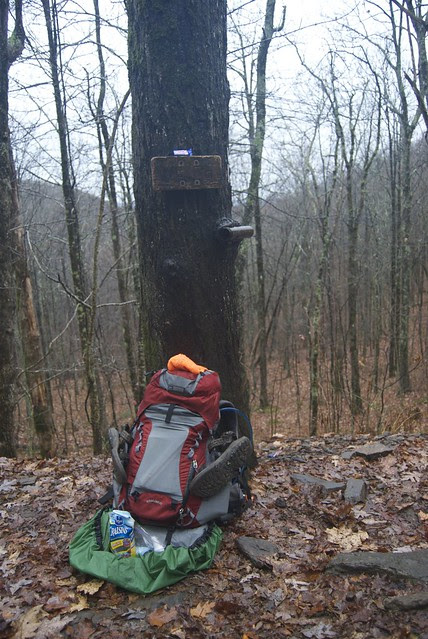 I was amused to find my trail name already on the sign — apparently there was a northbound Karma, earlier. (I don't know what the pipe is about.) 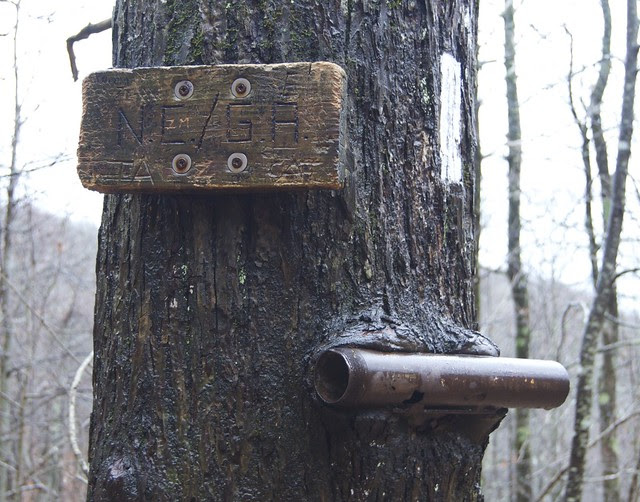 According to my GPS, the actual border was just around the bend. (The scribbly bit is where I stopped by the sign on the tree.) 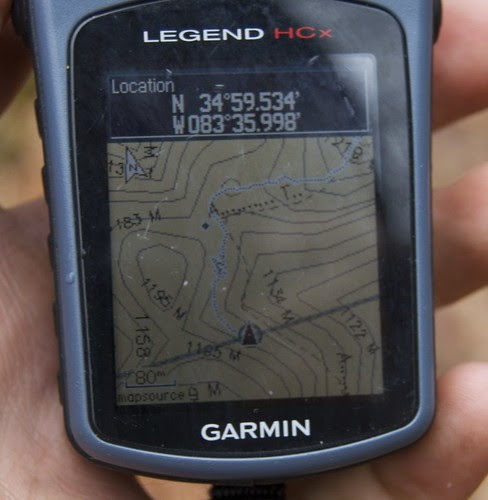 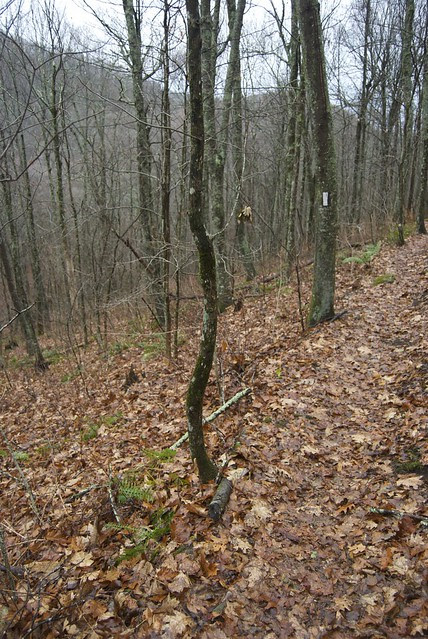 We had to adjust — being in Georgia — to saying "going to Springer Mountain" instead of "going to Georgia".

We started to see holly trees as part of the evergreen population, some with berries. 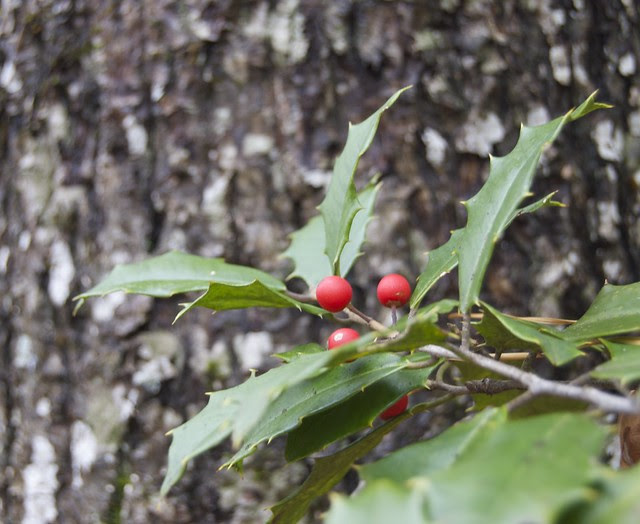 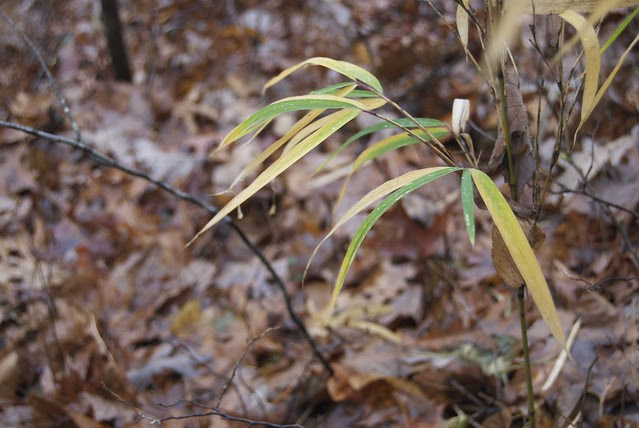 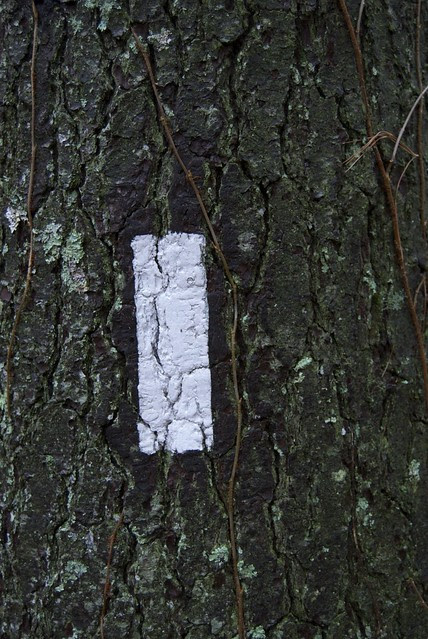 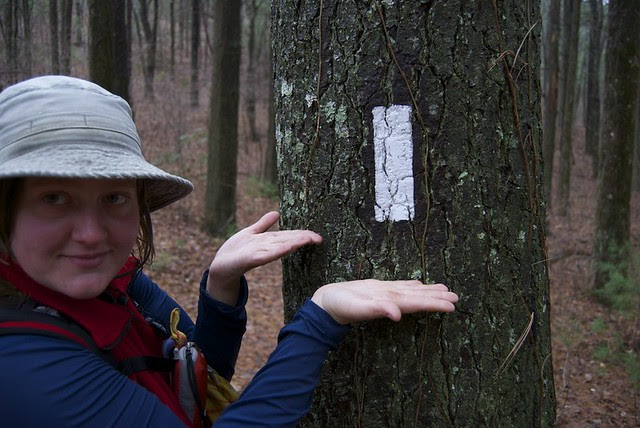 When I suggested this be an 'everyday occurence' shot, Jo said: I hope not! However, our last few hitches had been in the cold and wet with our hands being numb if we stuck 'em out too long. (Eventually some day hikers — from Texas! — who we had seen earlier came back and gave us a ride into town.) 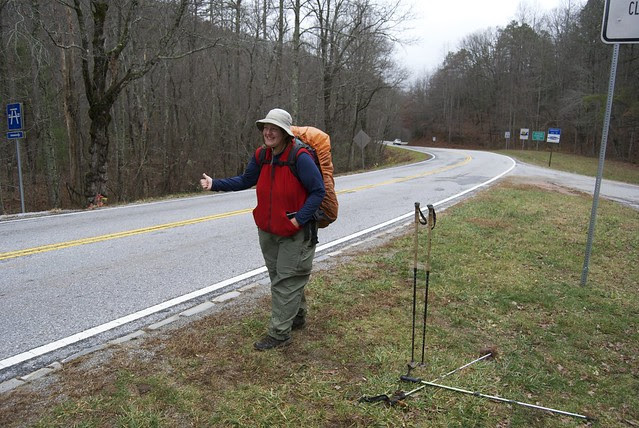 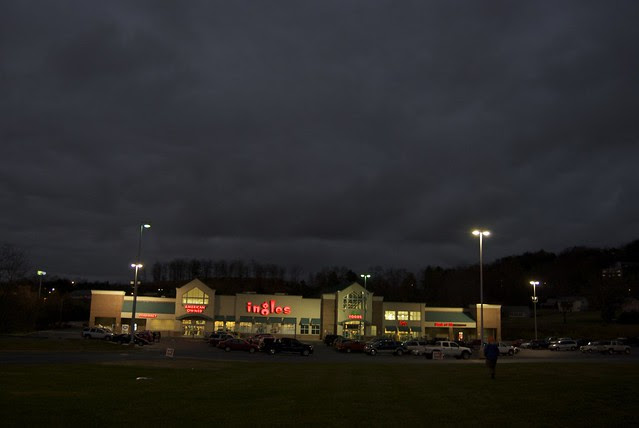 However! Jo's friend Bovee — living in Ohio, but visiting the Smokies — dropped in (that is, drove several hours) to visit us, along with a couple friends from the environmental learning center where she works. (E.L.C.s are the underground railroad of Jo's life, apparently.) 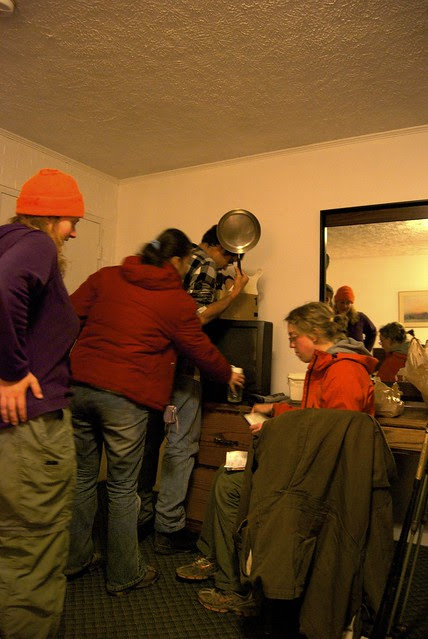 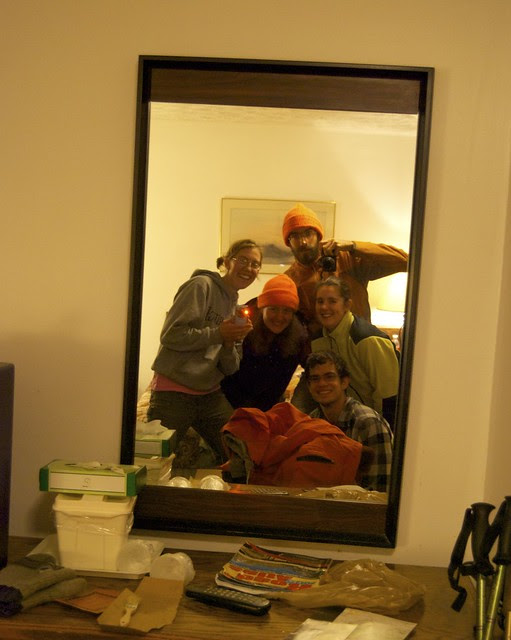